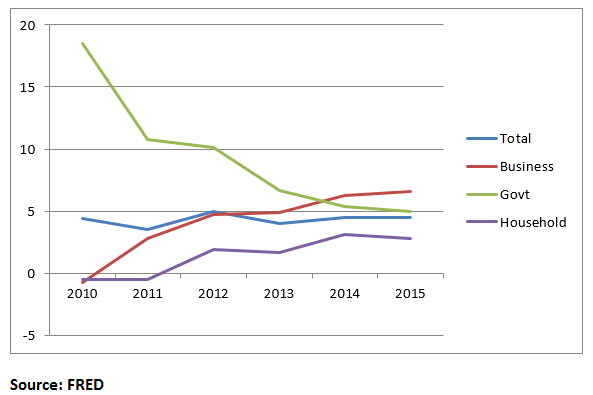 Just as governments are cutting back on issuing new debt, the corporate sector has taken up the role of being the largest source of new debt in the United States. This shift in debt issuance is readily apparent in Chart 1. Since the crisis of 2008, the growth in government debt has dramatically decreased from nearly 20 per cent annually to less than 5 per cent, more in line with the nominal growth in the economy. Consumers continue to remain wary of increasing their debt load . On the other hand, the corporate bond market has been on a bit of a tear in recent years .That segment of the debt market now outpaces all other debt issuers. The U.S. corporate bond market is valued at nearly US $9 trillion; by comparison, it is larger than the GDP of Germany, France and the U.K. combined. No longer are governments the leaders in generating new debt, it has ceded that title to corporate America.