Stock Market decoupled from financial well being of average Americans. 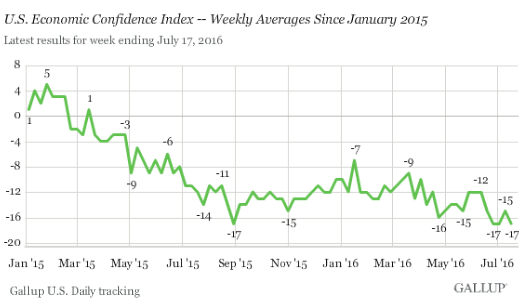 Gallup releases an Economic Confidence Index which should reflect the overall sentiment of Americans as it pertains to the economy. With the stock market near record highs and the housing bubble market soaring, you would expect average Americans to be smiling from ear to ear with glee. But when you click on over to Gallup, the chart looks downright gloomy like finding out you just failed a midterm exam you studied so hard for. While Gallup may be stumped and scratching their head as to why this divergence is there, I feel we have touched upon a few points as to why this is occurring. First, half of Americans don’t even own one stock. Next, you have many U.S. companies making large profits abroad. Good for the company but that doesn’t translate necessarily into a better financial position for most Americans. Housing values being inflated only keeps Americans from buying as reflected in a generationally low homeownership rate. In other words, crony capitalism is working as it should.