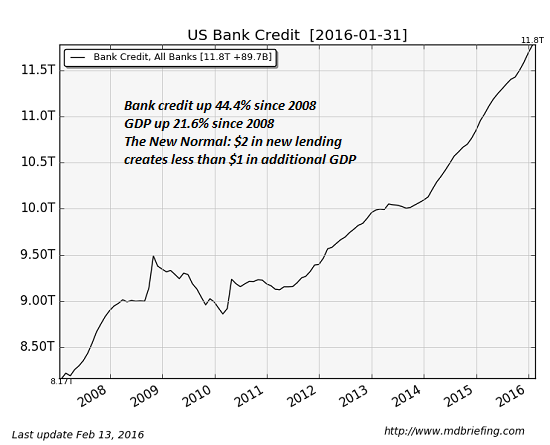 Remember a time when people used to be cautious when it came to taking on debt? Probably vaguely since the entire U.S. economic system is built on “gold” and “platinum” credit cards being shelled out to people that can’t afford an ounce of either. In the mail I’m receiving overwhelming offers for credit cards and personal loans. The last time credit was flowing this easily was in 2005 and 2006. I’m not sure if people realize that the Great Recession was caused by excessive debt. Too much leverage. So it should be sobering to hear that since 2008 bank credit is up 44 percent while GDP is up 21 percent. What is basically happening is that for every $2 in lending GDP is moving up by $1. In other words, we are building a house of cards once again.