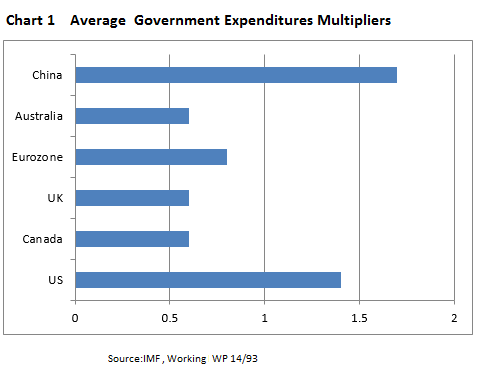 When appearing before their political masters, central bankers, invariably, urge them to adopt an expansionary fiscal policy. Ben Bernanke, and now his successor, Janet Yellen have pleaded with Congress to adopt a more simulative fiscal policy. Mario Draghi continuously stresses the need for fiscal policy in support of the ECB’s easy money policy. Most recently, the head of the IMF, Christine Lagarde, stated that some countries “may have room for fiscal expansion”, citing Canada as one country that has “made the most of this space.” Indeed, the Governor of the Bank of Canada (BoC) has made it a selling point that they believe that Canada’s latest fiscal stimulus measures will have a positive effect on the real GDP. In part, the fiscal policy shift has allowed the BoC to refrain from cutting its lending bank rate.