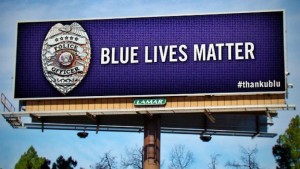 Do “blue lives” matter more than other lives?

According to Louisiana Governor John Bel Edwards, they do. He signed a new law last week making attacks on armed government workers – you know, cops – a “hate crime” subject to harsher and additional penalties than would otherwise apply.

Edwards – a former armed government worker himself – has an interesting view of crime and punishment, as well as of rights. These vary in degree according to such things as the color of the uniform one wears.

Punch a mere peon (not uniformed) in the face because you hate the guy’s guts and it’s still a crime, but a lesser one. “Hate” enters into it only if the person receiving the punch happens to be a certain category of person, such as a uniformed one.