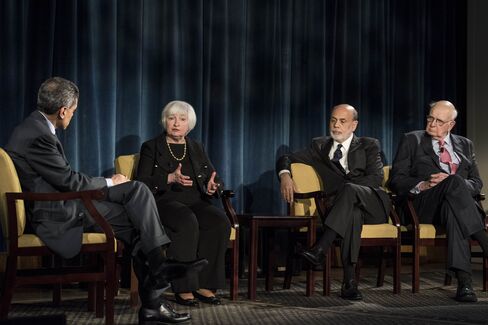 Treasuries headed for their biggest two-week gain since January as the Federal Reserve warned the global economy presents heightened risks.

U.S. government securities have returned 1.3 percent in the period, the biggest back-to-back weekly run since the period ended Jan. 15, based on Bloomberg World Bond Indexes. The Japanese yen has surged 11 percent this year, the most among the 16 most-traded currencies against the dollar, highlighting demand for perceived haven assets.

Former Fed Chair Alan Greenspan said Thursday U.S. policy makers have to take global developments into account. “The major problem that exists is essentially the issue that productivity growth over pretty much the spectrum of all economies has been under 1 percent a year for the last five years,” he said. Policy makers are concerned that slowing world growth will restrain U.S. exports, according to minutes of the Fed’s March meeting issued this week.