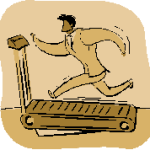 Nearly 7 years have elapsed since the official end of the Great Recession. By now it’s painfully obvious the rising tide of economic recovery has failed to lift all boats. In fact, many boats bottomed out on the rocks in early 2009 and have been taking on water ever since.

Last week, for instance, it was reported that U.S. credit card debt topped $714 billion in the third quarter of 2015. That’s up $34 billion from the year before. Shouldn’t the economic recovery allow consumers to pay down their debts?

Indeed, it should, if only the economic recovery was the result of real, economic growth. To the contrary, the recovery has been faux growth driven by cheap Fed credit and financial engineering. Mutual increases in prosperity haven’t occurred.