The biggest rise in expenditures comes from rising housing costs. 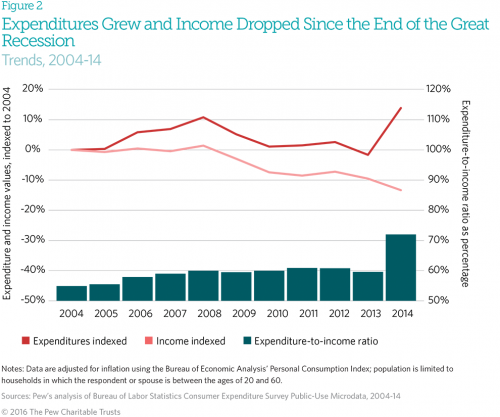 The driving force in this political movement is anger and many American families need only look at their bank statements to understand why. Since 2004 median income has fallen by 13% while expenditures have risen by 14% according to latest figures pulled by Pew Research. That strikes at the heart of why the middle class is now a minority. People are struggling to get by and while the Fed is obsessed with interest rates, most families are seeing the impact of crony capitalism devastating their wallets. One perfect example is the banking bailouts. The bailouts simply allowed the too big to fail banks to get even bigger and allowed large investors to purchase many homes as investments. This happened while regular families were struggling. The end result is higher housing costs but no real underlying gain in income. Since housing eats up the biggest part of your budget this has had a major impact. 1 out of 3 American can no longer afford rent, food, or transportation.