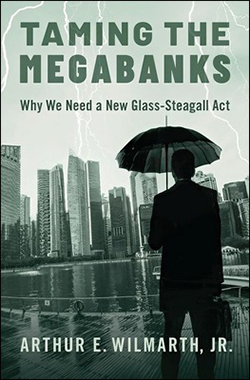 It has been the contention of Wall Street On Parade for more than a decade that today’s so-called “universal banks,” also variously known as megabanks or Global Systemically Important Banks (G-SIBs), are a banking model from hell that was thoroughly discredited in the tens of thousands of transcripts and documents released by the U.S. Senate following its multi-year investigation of that structure in the early 1930s.

Now the seminal book proving that theory has just been published. Written by Arthur E. Wilmarth, Jr. and titled Taming the Megabanks: Why We Need a New Glass-Steagall Act, the book brilliantly takes the reader through a riveting guided tour covering the past century and the resurrection of this same disastrous Oxford University Press is the publisher of Wilmarth’s book. We can envision it becoming one of the most important works of this century in providing the impetus for Congress to finally restore the Glass-Steagall Act – the 1933 to 1999 law that mandated the separation of stock trading and stock underwriting firms from federally-insured, deposit-taking banks. That legislation protected the U.S. financial system for 66 years. It took just nine years after its repeal for the universal banks on Wall Street to blow up the financial system in a replay of 1929, taking the U.S. economy along for the gut-wrenching ride.