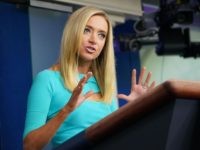 She noted that President Donald Trump had condemned white supremacy by saying “sure” three times during the presidential debate on Tuesday night when asked if he would denounce white supremacists. She also noted that he did it again in response to a reporter on Wednesday.

“I always denounce any form, any form of any of that,” Trump replied on Wednesday afternoon when asked to condemn white supremacists. “You have to denounce.”