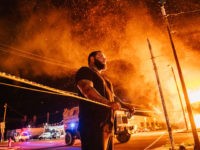 A coalition of leftist groups is “secretly” discussing how to mobilize and prepare for what it envisions as a “political apocalypse” full of violence and chaos if Democrat presidential candidate Joe Biden fails to win a landslide victory on November 3, the Daily Beast reported Monday.

“Occupy shit, hold space, and shut things down, not just on Election Day but for weeks,” an unnamed source said in describing the coalition’s effort, dubbed the “Democracy Defense Nerve Center.”

The leftist group, convened by the relatively secret Fight Back Table (FBT), reportedly discussed their plans in secret during a Zoom virtual meeting.

Referring to the meeting, the Daily Beast reported: