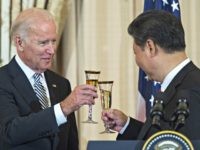 Democrat presidential candidate Joe Biden defended backing China’s entry to the World Trade Organization (WTO) in 2001, saying he was not “naive” about the global superpower.

During a town hall with CNN’s Jake Tapper, Biden defended supporting China’s entering the WTO which has resulted in at least 3.4 million American jobs being eliminated from the United States economy — at least 2.6 million of which were eliminated in the manufacturing sector.

Biden also defended supporting normalizing U.S. trade relations with China, saying “it’s in our interest for China to be stable” and asserting he wants “China to grow.”

The exchange went as follows: