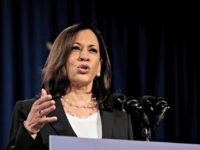 Sen. Kamala Harris (D-CA) argued on Thursday, regarding Jacob Blake’s shooting by Wisconsin police, that black lives have never “been treated as fully human” in America.

Harris, the Democrat vice-presidential nominee, made the remark in a speech that was billed as a pre-rebuttal to President Donald Trump’s appearance at the Republican National Convention. The California lawmaker, in particular, argued recent events, including Blake’s shooting and the death of George Floyd in police custody, had exposed the difficult realities facing many of the country’s citizens.

“The reality is that the life of a black person in America has never been treated as fully human,” Harris said. “We have yet to fulfill that promise of equal justice under the law.”