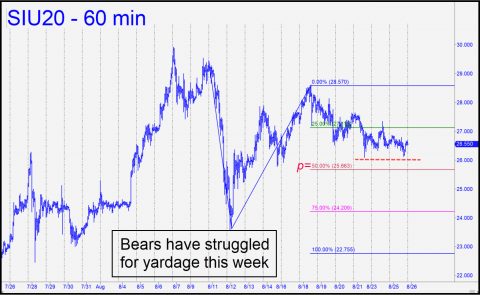 Bullion bulls should be enjoying the show even though silver an gold futures have gone nowhere for the last couple of weeks. Comex Gold has been pounding on a midpoint Hidden Pivot support of intermediate degree almost daily, and although it has traded slightly beneath the support a couple of times, most of the action has been above it. Silver has been even more recalcitrant, defying bears to push it down to a midpoint pivot at 25.66 (shown in chart above). So far this week, the September Comex contract has traded no lower than 26.09.

Although both silver and gold could breach their respective midpoint supports and fall, respectively, to as low as 1837 and 22.75, this appears unlikely at the moment. In fact, bears could keel over from exhaustion if they are not able to breach the midpoint pivots by Friday. If that happens, it would clear the way for a strong rally Sunday night. Although there is always the chance of a rout such as occurred for a single, ugly day two weeks ago, these episodes are becoming increasingly rare and fleeting. There are obviously enough buyers around to push back hard on days when bears don’t have help from some source, or combination of sources, that stupidly treats bullion like brick dust.