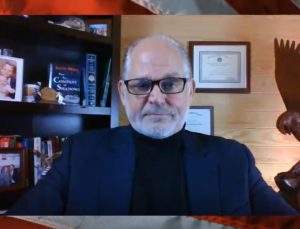 Former CIA Officer and counter-terrorism expert Kevin Shipp says, “I think people need to understand that the violence you are seeing in the streets is going to increase leading up to November. We are seeing Black Lives Matter (BLM) mob thugs attack people just because they are white. . . . The riots and looting is going to get worse. . . . Let me say this, Black Lives Matter is not a civil rights movement at all. People need to understand that Black Lives Matter is directly connected to the Nation of Islam. Louis Farrakhan teaches that white people are devils and are inferior to black people and should be eliminated as should the Jews. Both of Black Lives’ leaders have come out and said we are Marxists, and we train our people in Marxism. . . . Black Lives Matter is essentially a terrorist organization, and yet these mayors and governors are leaving them alone. Not only that, but large companies like Coca-Cola are contributing millions of dollars to Black Lives Matter. It is an organization of anarchy bent on overturning our constitutional system and attacks churches, Christians and Jews. . . . This is serious, and it’s going to get worse. Black Lives Matter is going to increase its attacks on white Americans, Jewish Americans, and these companies need to stop supporting that.”