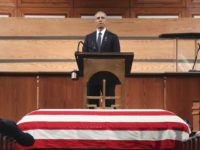 Former President Barack Obama used his eulogy at the funeral of Rep. John Lewis (D-GA) to call for an end to the Senate filibuster to pass Democrats’ new legislation on voting reform.

He urged Congress to pass a new version of the Voting Rights Act of 1965.

“You want to honor John? Let’s honor him by revitalizing the law that he was willing to die for,” Obama said, to applause.