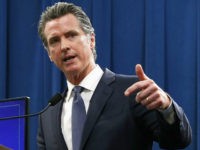 California Gov. Gavin Newsom has already released thousands of prisoners into communities across the state and now he is poised to release as many as 8,000 more by end of July, a move said to be necessary to prevent the spread of coronavirus.

This development, which the state announced on Friday, comes after the head of medical services for the state’s prison system was replaced following an inmate infection spike after more than 100 prisoners where transferred from the California Institution for Men in Chino from San Quentin.

“These actions are taken to provide for the health and safety of the incarcerated population and staff,” corrections Secretary Ralph Diaz said in a written statement. “We aim to implement these decompression measures in a way that aligns both public health and public safety.”