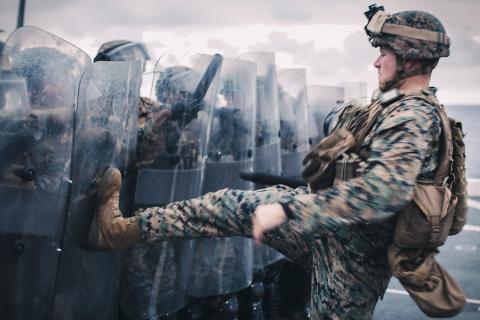 “Whenever the vicious portion of population shall be permitted to gather in bands of hundreds and thousands, and burn churches, ravage and rob provision-stores, throw printing presses into rivers, shoot editors, and hang and burn obnoxious persons at pleasure, and with impunity,” Abraham Lincoln told a crowd in Springfield, Illinois, in 1838, “the feelings of the best citizens will become more or less alienated from it.”

Lincoln’s Lyceum Address spoke to the concerns over the riots that had erupted in cities throughout the nation in the 1830s. As many politicians have done in the face of social unrest, Lincoln called for law and order. Although he did not advocate police suppression of the riots—as professional police forces were unknown to the United States in 1838—he would actively work to help establish the Metropolitan Police Department for the District of Columbia in the first months of his presidency.