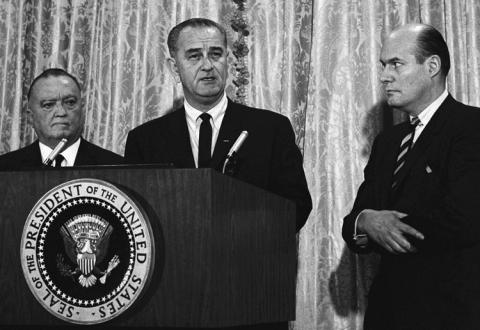 Most people associate the Great Society initiative with Lyndon Baines Johnson. There is very good reason for that, to be sure. As president, Johnson, the “master of the Senate,” was the driving force behind the raft of legislation that passed during his administration, the 1964 and 1965 legislation that framed and filled in his vision for a “great society” in which the blessings of postwar America’s bonanza would be shared by all. Johnson’s spearheading of the Great Deal initiatives in turn stemmed from his personal attachment to the New Deal. Johnson had been a Roosevelt stumper in Texas before finding his feet in Washington politics, and the desire to complete FDR’s domestic legacy by positioning government at the center of a vast nationwide redistribution network was the motor of the Great Society as we know it today. President Johnson was a necessary condition for the Great Society programs that cleared Congress with remarkable regularity and became part of the federal bureaucracy. No Johnson, no Great Society.