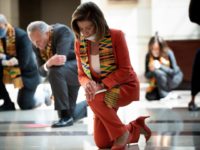 Democrat lawmakers, including House Speaker Nancy Pelosi (D-CA), took a knee and corresponding moment of silence for 8 minutes and 46 seconds in Emancipation Hall at the U.S. Capitol on Monday in honor of George Floyd and to “respect the actions of the American people to speak out” against the “consequences” of slavery and racism “specifically manifested in police brutality.”