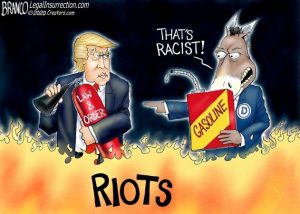 President Trump signed an Executive Order (EO) on some police reforms this past week that, among other things, bans chokeholds. What about reforms and instructions for the public interacting with police? President Trump missed an opportunity to tell citizens NOT to resist arrest and to follow lawful commands of the nation’s law enforcement officers. That would go a long way to stopping the violent confrontations and police doing their jobs.

Delegitimizing police and causing chaos seems to be part of the plan by the Democrat Party, which has adopted a Marxist communist agenda. The big picture story here is America is under full on attack, but not for reform. It is all part of the New World Order plan to stomp out America and reset the world economically and geopolitically. There is going to be a so-called reset that the globalists have been planning at the World Economic Forum in Davos. What will it look like? If Donald Trump gets to reset things, the globalists will not like how that plays out. The battle is really about who is going to shape the reset and how will the world look afterward.