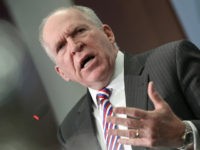 On Friday’s broadcast of MSNBC’s “All In,” former CIA Director John Brennan stated that he welcomes the chance to talk with John Durham’s investigators and is willing to talk to them because he is confident he has nothing to hide and people have been deceived by people like President Trump and William Barr.

Brennan said, “John Durham, who is a well-respected individual from the Department of Justice…is conducting this investigation, I guess this investigation, and looking at what happened during those last months of the Obama administration and the first year or two of the Trump administration. I’d like to think that John Durham and the other DOJ and FBI investigators will continue to honor their oath of office and to carry out their responsibilities without any consideration of [the] political interests of Donald Trump.