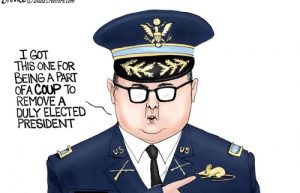 The Democrat attacks on President Trump continue with what appears to be a much more intense volume. This includes the mainstream media (MSM), which we all realize is nothing more than socialist Democrat New World Order Globalist propaganda. Why the intensified attacks? They are afraid of losing their power, kickback scams and freedom because some of them are going to jail for their crimes and hoaxes to remove a duly elected President from Office. Nothing is working to dump Trump. Trump is now beginning to fight back on all sorts of levels including mass firings of Obama holdovers at the White House.

Dems are desperate after the Iowa and New Hampshire primaries. They don’t have a leading candidate that can beat President Donald Trump. They are also afraid of Bernie Sanders because he threatens the crooked establishment. If they screw him out of the Democrat nomination again, look for a huge split in the party which is to Trump’s advantage.