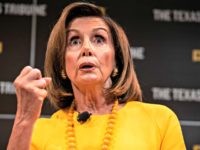 Speaker Nancy Pelosi railed against President Donald Trump’s legal team on Thursday, asking “how they can retain their lawyer status.”

“I don’t know how they can retain their lawyer status, in the comments that they’re making,” Pelosi told reporters on Thursday afternoon.

“Some of them are even lawyers,” Pelosi said, castigating the idea in a statement to D.C. journalists:

Imagine that you would say — ever, of any president, no matter who he or she is or whatever party — if the president thinks that his or her presidency … is good for the country, then any action is justified — including encouraging a foreign government to have an impact on our elections.