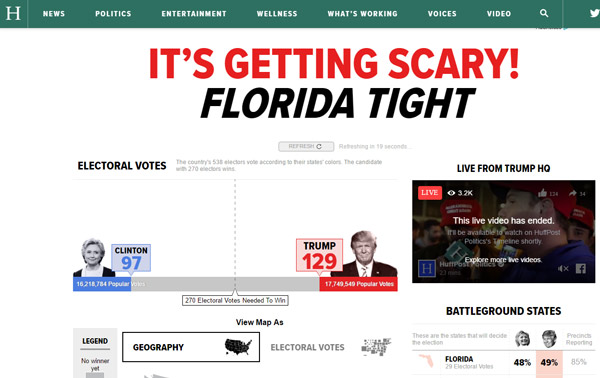 As late as Monday evening the Huffington Post was 98%+ certain that Hillary Clinton would win the Presidency.

Turns out they may have been off… by a lot.

With Florida leaning towards Trump and 92% of the votes already counted, what was a sure thing suddenly isn’t.

Michigan remains in play and the mainstream media reports that the Clinton campaign still thinks they have a good chance at taking the state, though Trump is in the lead by a mere 100 points as of this writing. Pennsylvania, though only a small percentage of votes have been counted, is already being projected for Hillary. Ohio, which was originally marked off as a blue state is reportedly extremely close and will come down to the wire according to Republican strategists.