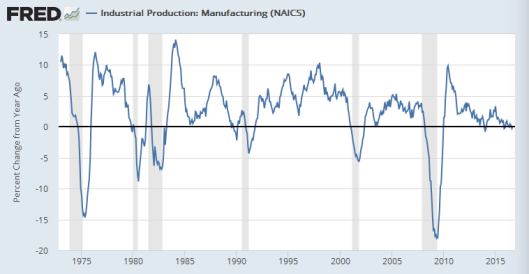 Industrial production rose 0.1% in September vs. a Bloomberg Econoday Consensus of +0.2%. Manufacturing rose 0.2% vs. a consensus of 0.1%.

However, the Fed revised August production and August Manufacturing from -0.4% to -0.5%, effectively negating the meager rise in total production.

Flat is the best word to describe the factory sector right now. The latest evidence is the industrial production report which inched up only 0.1 percent in September with August revised 1 tenth lower to minus 0.5 percent. These two months follow, however, solid 0.5 percent gains in June and July which, when averaged all altogether however, extend what has been a flat two years for the industrial economy.

Manufacturing production did rise a nearly respectable 0.2 percent but follows a downwardly revised 0.5 percent decline in the prior month. Motor vehicle production, which was strong during the summer, was flat in September, up 0.1 percent. High-tech production bounced 0.6 percent higher to help drive the overall gain for manufacturing. A negative, however, is a second straight decline in business equipment, down 0.2 percent and 0.5 percent the last two reports.

Year-on-year, industrial production is down 1.0 percent with manufacturing dead even at zero percent. The 2014 collapse in oil prices and its hit on demand for energy equipment pulled the factory sector into low single digit contraction, which is where it continues to struggle.