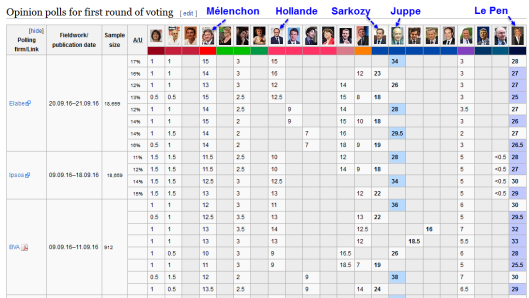 Former Prime Minister Alain Juppe is extending his lead over former President Nicolas Sarkozy in their battle for the 2017 presidential nomination of France’s Republican party, a poll showed.

Juppe is the preferred candidate of 39 percent of voters who identify as being on the right or center of the political spectrum, compared with 31 percent for Sarkozy, according to an Ifop poll published Sunday in Le Journal du Dimanche. That’s a lead of eight percentage points, up from six percentage points two months ago.

The survey is the latest to show Juppe’s lead widening in the vote that will be held in two rounds, on Nov. 20 and Nov. 27. Even so, the Ifop poll shows that Juppe’s support comes largely from voters who identify with centrist parties instead of from Republicans themselves. All voters are eligible to vote in the primary provided they sign a statement saying they believe in the values of the right and center and contribute 2 euros ($2.20) to the cost of the balloting.