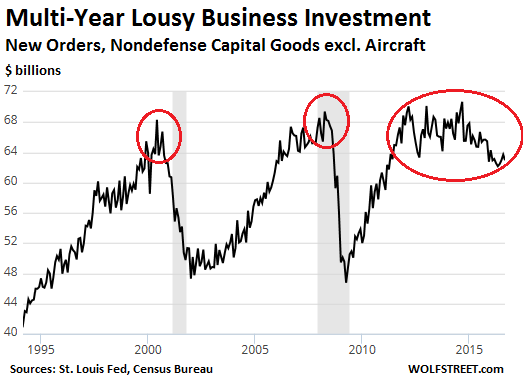 A pattern that doesn’t match the prior patterns of declines.

What if it’s really different this time? What if eight years of radical monetary policies have altered the way things work to such an extent that the normal economic patterns no longer apply, that the economy has entered far into a new territory where ultra-cheap credit sloshes around, and where – instead of short, sharp recessions that clean out the cobwebs and help economic actors slough off excess debt at the expense of creditors – we get years of quagmire interrupted by mild declines and false-hope rises, even as the debt burden continues to grow and grow to suffocate all hopes at economic growth?

There have been plenty of symptoms of this. Here is one more: business investment – which plays an outsize role in economic growth. And it just booked its worst September since 2010.