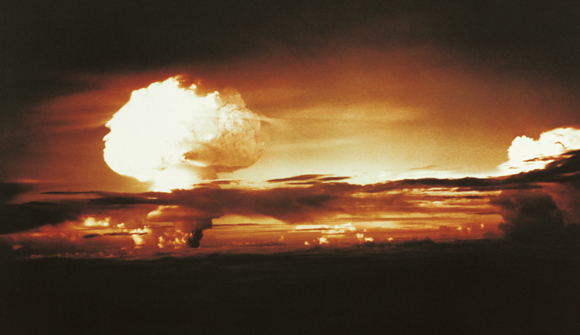 To commemorate the seventieth anniversary of the first Bikini Atoll nuclear tests, the nonprofit National Security Archive has published declassified footage of the Able and Baker “shots” in the summer of 1946. – Maritime Executive

The most obvious, apparent fakery can be seen in the “Baker” atom-bomb test, HERE. The nuclear blast emerges from the water (the bomb was some 30 meters down) and looks exactly like other images of nuclear explosions.

It doesn’t seem hampered by the water at all. The plumes are the same, the smoke is the same.

But it gets even stranger. The bomb goes off with a tremendous explosion, but the ships around the explosion don’t seem to move. They don’t even rock back and forth.