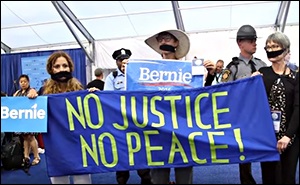 It had been in the planning for weeks and it was executed as flawlessly as the DNC’s own strategy to steal the election for Hillary Clinton. As Clinton’s nomination to serve as the presidential candidate was confirmed at the Democratic National Convention yesterday, hundreds of Senator Bernie Sanders’ delegates staged a walkout protest, leaving large swaths of the seats in the convention center empty.

Waving signs that read “The Revolution Continues,” “A Future to Believe In,” “No TPP,” and chanting “This is what democracy looks like,” the marchers peacefully left the convention center and rallied outside. Numerous protestors wore tape or material over their mouths to protest how the DNC’s actions had illegally silenced their voices. (See second video below.)

Several hundred Sanders’ supporters also took over part of the media tent for the convention for a period of time.