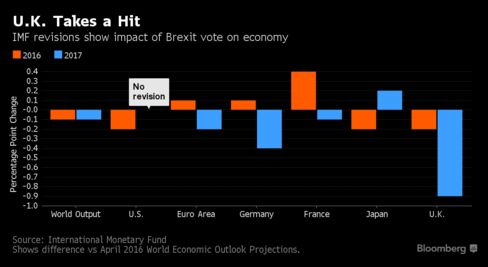 Following on from the Brexit vote last month the IMF have decided to re-evaluate their forecast for global growth.

Bloomberg reports that they have revised their original 3.2% forecast down to 3.1% for 2016 and from 3.5% to 3.4% for 2017. While these feel like very modest revisions ,the IMF would not be known for radical changes of direction preferring slow and steady revisions.

[…] Their new forecast is based on the assumption that British and EU officials reach new trade agreements that avoid a “large increase in economic barriers.” However, if talks break down, Britain will slip into recession as more financial institutions relocate to the euro area and consumption and investment contract more than expected, the fund said. In a “severe” scenario, global growth is seen sliding to 2.8 percent this year and next.