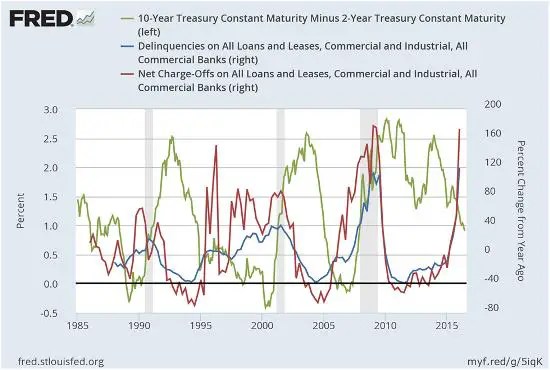 Our good friend Michael Pollaro just sent a chart from the St. Louis Fed that shows the US drifting back into yet another banking crisis.

[…] The green line tracks fluctuations in the US yield curve, defined as the difference in yield between 10-year and 2-year Treasuries. When the yield curve is steeply positive, banks are able to borrow short at low rates and lend long at higher rates, earning a nice return and in the process driving economic growth. When the yield curve flattens the opposite occurs, with banks unable to make money and becoming reluctant to lend. So a flattening yield curve implies a slowing economy. Note the similarity between the past few years’ spread contraction and the one that began in 2004 and culminated in the Great Recession.

Now check out the red and blue lines representing different measures of credit quality. The lower they are, the fewer loans are in various categories of “non-performance,” and vice versa. What’s happening now is similar to the spike in bad loans that started in 2005.