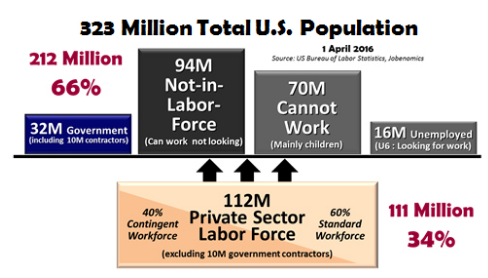 The latest employment report was lackluster. The math on the employment numbers has concealed a deeper problem in the economy. Many Americans are struggling and the middle class continues to lose ground. The most startling figure coming out was that 562,000 people dropped out of the labor force. While there is a bit more information on those “not in the labor force” the press is still largely quite on this issue. You can frame the topic in a more poignant way by saying that 34 percent of all Americans financially support the rest of the country. With an aging population and record levels of debt, this might be a problem.